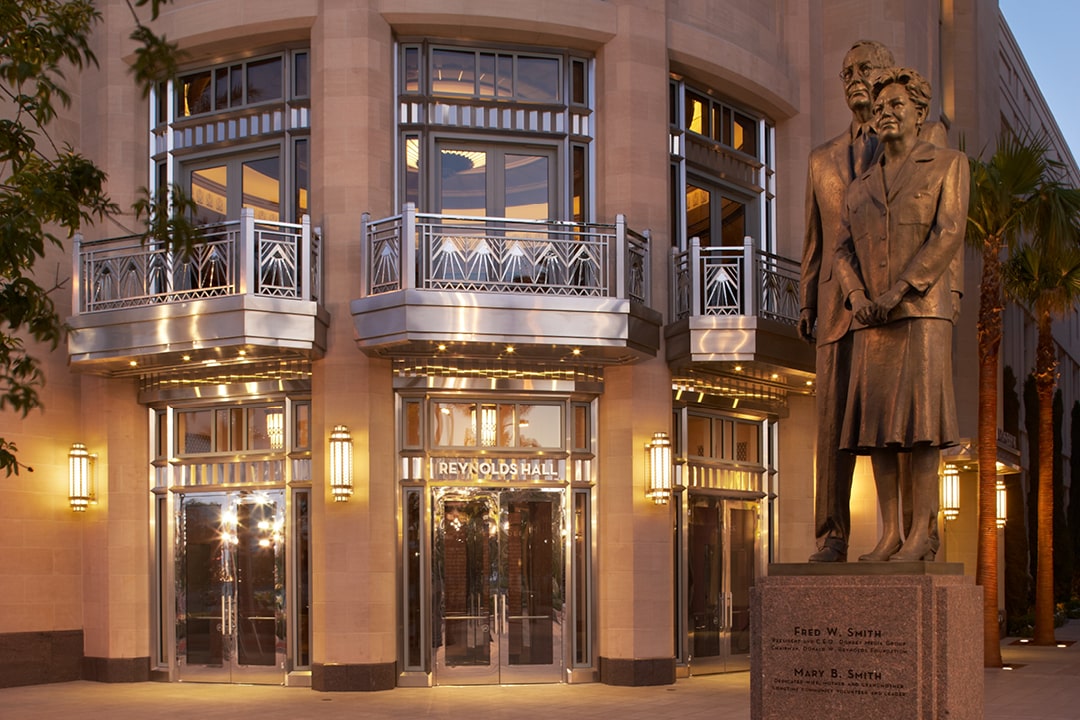 The Heart of the Arts®

From its very beginning, The Smith Center was envisioned as a world-class performing arts center that would develop and present the best and brightest in a broad range of first-rate programming and unite the residents of our community.

From its very beginning, The Smith Center was envisioned as a world-class performing arts center that would develop and present the best and brightest in a broad range of first-rate programming and unite the residents of our community.

When The Smith Center opened its doors, it was hailed as the realization of a dream in the desert. Although Las Vegas was already known as the Entertainment Capital of the World, it had never offered a leading performing arts center that could serve as a cultural foundation and connect the community by presenting music, dance and theater performances outside of the Strip. In fact, prior to the opening of The Smith Center, Las Vegas remained the largest community in North America without a performing arts center, an element that defines most of the great cities in the world.

The tremendous undertaking to address this issue began in the early 1990s, when a group of community leaders gathered and decided to dream big, creating a vision for the cultural infrastructure they felt their fast-growing city of Las Vegas so badly needed. This followed with a tireless, 17-year campaign to rally community and government support for a cultural resource that would breathe new life into Southern Nevada and sustain it for generations to come.

While sentiment in favor of a performing arts center was high, funding the project initially proved daunting. Thanks to an early and generous gift of $50 million from the Donald W. Reynolds Foundation, the project team gained the momentum needed to generate fundraising and widespread community support.

A public-private partnership was formed, with the City of Las Vegas investing resources in the center’s development to help revitalize Las Vegas’ downtown. The city council passed a memorandum to provide 5.5 acres of land for the center, as well as infrastructure, parking and environmental clean-up. On top of this, the project team successfully lobbied the state legislature and Clark County to approve a car rental tax to help fund the center.

Fundraising advanced with the support of 57 community members, The Smith Center’s Founders, each donating $1 million or more.

When the Great Recession threatened to stall the project, the Reynolds Foundation further contributed an additional $100 million —one of the largest arts donations in U.S. history — which secured the foundation’s chair Fred Smith and his wife Mary as the center’s namesakes.

The years-long planning of The Smith Center focused on every level of detail. This involved the project team touring more than 100 venues around the world to gather ideas for the center’s design, including visits to the Palais Garnier in Paris, the Musikverein in Vienna and La Scala in Milan.

The Smith Center ultimately took inspiration from the Art Deco architecture of the Hoover Dam, in homage to the dam’s key role in the development of Las Vegas. Even before hiring nationally recognized architect David M. Schwarz, The Smith Center team engaged an acoustician to ensure that audiences who attended events would experience the most optimal sound possible.

A Pioneer in Arts, Design and Education

Along the way, several hallmarks helped to define the long-term vision of The Smith Center. These included becoming the first performing arts center of its size and scope to achieve a gold-level certification in the Leadership in Energy and Environmental Design (LEED) program. The center further commissioned numerous art pieces by celebrated artists to highlight artistic creativity in all its forms. Through these efforts, The Smith Center team set out to make its 4.75-acre site a shining example of arts and innovation.

The Smith Center’s visionaries established the intertwining of education and the arts as one of its core values, viewed equally important to presenting the finest live performances. Years before the center’s star-studded opening-night celebration in 2012, filmed by PBS, The Smith Center’s Education and Outreach team pioneered partnerships with Clark County School District and the nation’s leading national arts education programs. This developed a foundation for educational programming that would serve to foster the love of art in future generations.

Within its first five years, The Smith Center marked incredible milestones that secured its place in Southern Nevada’s cultural landscape. These include presenting performance icons from across the nation and the world, such as John Legend, the Alvin Ailey American Dance Theater, the Royal Philharmonic Orchestra and Wynton Marsalis. It brought the best of Broadway productions to its stage, including some on their first national tours, such as “Kinky Boots,” “The Book of Mormon” and “Wicked.” The center further produced all-new works, including collaborating with Teller and the American Repertory Theater on a reimagined “Tempest,” followed by producing its first original musical, “Idaho! The Comedy Musical.” The Smith Center also partnered with PBS on multiple occasions to film concerts for national broadcast, bringing the center into Americans’ living rooms.

Today, The Smith Center serves as  a leading performing arts center, ranked as one of the top 10 theaters in the world by Pollstar Magazine, a respected trade publication for the concert industry.  With its three performance spaces — Reynolds Hall, Myron’s at The Smith Center and Troesh Studio Theater — The Smith Center offers one the most cutting-edge, acoustically advanced and versatile performing arts campuses in the world. It continues to transform arts and culture in Southern Nevada, by regularly presenting acclaimed performers and Broadway tours that might not otherwise visit Las Vegas. Within its first eight years, its education and outreach initiatives impacted over 700,000 Southern Nevada students and teachers, at no cost to schools.

Here you’ll find answers to common questions about The Smith Center for the Performing Arts.

The Smith Center for the Performing Arts broke ground in May 2009 and opened in March 2012.

Inspired by many styles of architecture including Art Deco, The Smith Center is constructed with Indiana limestone and features smooth, masculine lines that are rich in detail. Its 17-story bell tower houses a four-octave carillon, comprised of 47 handcrafted bronze bells. The tower is topped with a stainless-steel silver crown.

The Smith Center’s aesthetic was conceived and realized by an internationally renowned design team led by David M. Schwarz Architects, Inc., widely hailed for creating extraordinary buildings. Schwarz has designed two of the most celebrated U.S. performing arts facilities — Bass Performance Hall in Fort Worth, Texas and Schermerhorn Symphony Center in Nashville. Schwarz’s firm is also responsible for designing other impressive public assembly buildings, including the American Airlines Center in Dallas and the Rangers Ballpark in Arlington.

The design team also included HKS Architects, Inc., a top-five architectural firm, which served as the center’s executive architect. Fisher Dachs Associates, Inc. is recognized as a leading theater consultant, with more than 250 projects around the globe. Akustiks is known for refined acoustical design and is responsible for recent acoustical successes with the new Schermerhorn Symphony Center in Nashville.

The public-private partnership that funded The Smith Center’s opening involved a car rental fee that resulted in a bond of $105 million. Until the bond on rental car fees is paid, the city of Las Vegas owns the facility and The Smith Center will operate it under a long-term lease agreement. After the bond is paid, The Smith Center anticipates that the city will deed the center back to the Foundation.

Since the project’s inception, creating a highly efficient and sustainable campus guided the design and construction process. The Smith Center’s sustainable features include energy efficient windows, water wise restroom fixtures and natural lighting. The Smith Center is the nation’s first performing arts center of its size and scope to be LEED certified.

The Smith Center was funded by a public-private partnership.

Public Sector: The city of Las Vegas provides land, infrastructure, environmental clean-up, and parking. The city of Las Vegas, Clark County and State Legislature collaborated on a car rental fee that resulted in a bond of $105 million. The City commitment totals $170 million.

Private Sector: In 2005, The Donald W. Reynolds Foundation with a landmark gift of $50 million, in honor of their chairman, Fred W. Smith, and his wife, Mary, led our private funding campaign. Since then, the Reynolds Foundation has continued their generosity, pledging an additional $100 million grant to help complete the campus. This gift is the largest philanthropic donation in state history, and combined with their initial contribution, makes it the second largest donation to the performing arts in the United States.

We continue to receive generous donations from a variety of companies, organizations, and private citizens.

Click here to learn more about how to support The Smith Center.

As a nonprofit, The Smith Center relies on community support to provide its world-class productions and impactful arts education experiences.

Click here to explore the numerous ways for community members and organizations to support The Smith Center.

Serving as an incubator for new artistic endeavors, our programs reach beyond The Smith Center campus and spread throughout the community, providing inspiration and encouragement to local arts organizations.

The Smith Center’s state-of-the-art facilities enable organizations to flourish artistically and grow institutionally, ultimately fulfilling our city’s longstanding dream of engaging the entire community in new and exciting ways through an array of inspiring programs.

Unlike many Las Vegas showrooms, The Smith Center is a technical work of art with the latest advancements and amenities. It accommodates the largest touring attractions, and yet is acoustically refined to showcase the finest soloists. It is a stand-alone, family-friendly cultural arts center that serves the needs of our community, local arts organizations, and our children.

The downtown area is an easily accessible city-center location. Its central location makes it an attractive destination for all residents in the valley. In cities across the country, performing arts centers have been an effective tool for downtown revitalization. Based on these case studies, the mayor and city planners were pleased to set aside downtown property for the project. Downtown has transformed into an artistic and cultural hub for Las Vegas, and The Smith Center is proud to be a part of its revitalization.

Set on nearly 5 acres, The Smith Center sits at the heart of the 60-acre Symphony Park development in downtown Las Vegas. It is northeast of the Cleveland Clinic Lou Ruvo Center for Brain Health, which lies at the corner of Bonneville Avenue and Grand Central Parkway.