The Story Behind The Smith Center’s Pipe Dream Sculpture 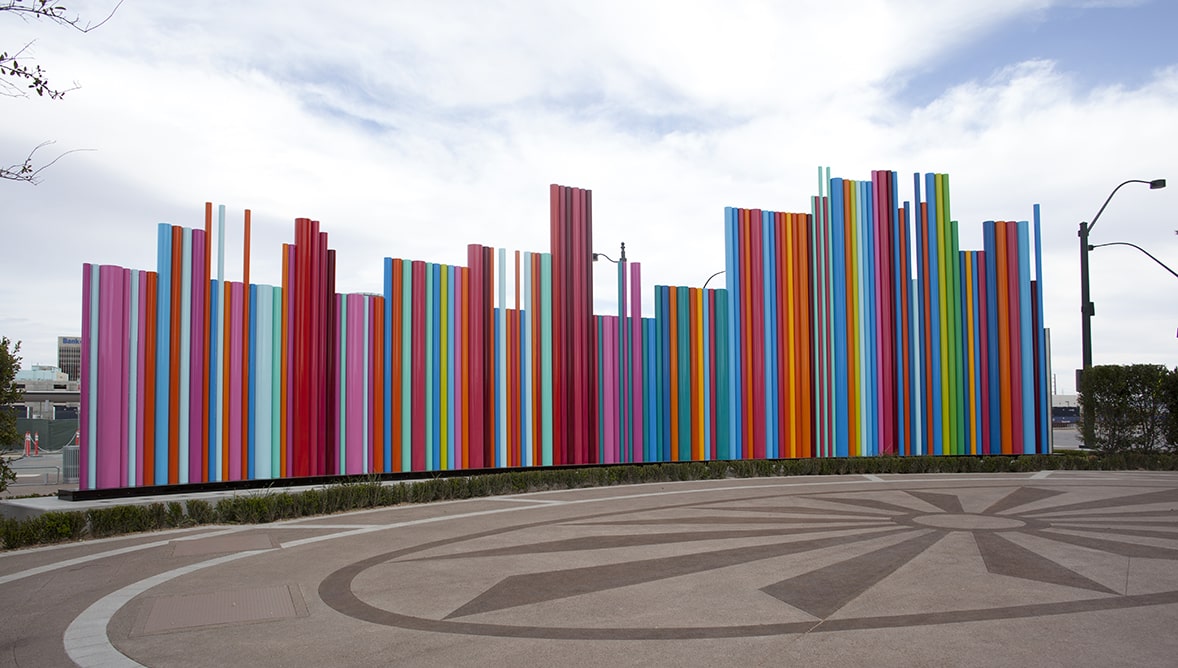 Most visitors to The Smith Center take part in a beloved ritual: snapping photos in front of the vibrant Pipe Dream sculpture outside the center’s east entrance.

Southern Nevadans of all ages enjoy this colorful collection of pipes as a part of their meaningful experiences with seeing shows and attending special events at the center. Many choose it as the backdrop for photos to commemorate their weddings, graduations and more.

But few know the full story behind how this sculpture came to be — including how its design draws directly from musical inspiration.

And even when Las Vegas sculptor Tim Bavington first conjured the idea nearly 10 years ago, he didn’t know just what to expect.

“The opportunity to contribute to the community was wonderful, but then there was no guarantee the work would be successful,” he remembers.

Roughly a year before The Smith Center’s 2012 opening, the center’s core team approached Bavington with an idea.

As he and several other community artists were already preparing paintings for the center’s interior, the team wondered if he might paint the wall behind an outdoor stage in Symphony Park.

Bavington had an idea of his own.

“I suggested the idea of something more sculptural,” recalls Bavington, an England native who remained in Las Vegas after completing his Master of Fine Arts at the University of Nevada, Las Vegas.

Bavington even had a groundbreaking style that suited The Smith Center well.

Hailing from an acclaimed career — which includes featured paintings at the Museum of Modern Art in New York City, and contributing to television series “The Simpsons” — Bavington explored innovative ways to portray music in the visual arts.

He received international recognition for translating melodies to canvas, by portraying specific music notes with corresponding vertical bands of colors.

Bavington envisioned a similar artwork for The Smith Center – this time, with a vertical sculpture.

“A public sculpture has some obvious differences to a painting, but that just alters the type of encounter with the work,” he explains. “With the large scale of a sculpture, one nice thing is that viewers have to look up.”

Bavington just needed to pick a song to serve as the sculpture’s inspiration.

While The Smith Center team provided a list of recommended tunes, his own research found the right fit with “Fanfare for the Common Man,” the 1942 classical piece by American composer Aaron Copland.

Originally commissioned as a musical tribute to those serving in World War II, the powerful piece has often been performed for presidents, played to honor branches of the military, and incorporated into news and sports events.

Many laud it as a musical celebration of all Americans — or, per its title, the common man.

This resonated with the mission of The Smith Center, a nonprofit, to serve as an inclusive, cultural hub for community members from all walks of life.

“I thought it was perfect for the project,” Bavington says.

Music weaves into every inch of the Pipe Dream sculpture’s design.

The 80-foot-long artwork is made with steel pipes and automotive paint, and each pipe represents a single note from Copland’s composition.

Featuring 19 colors, the sculpture represents the song’s root note (B-flat) with blue/green, the third note (D) with orange, and the fifth note (F) with magenta. The width of the poles roughly marks the duration of each note in the song. The tallest pipe stands at 26 feet.

The last, unpainted pole represents a musical rest at the end of the composition.

The sculpture’s lights, appearing every two feet, symbolize the piece’s 40 musical bars that mark the measure of time.

“My work has always aspired to a positive experience for viewers,” Bavington says of what he aimed to achieve.

Once Bavington received approval on the final design, he submitted it to engineers and a steel fabrication workshop that specializes in public sculptures.

The fabrication process took roughly five months, he recalls. In late 2011, the piece was installed at the east end of the center’s 2-acre Donald W. Reynolds Symphony Park.

“Relief,” he says of what he thought upon its completion. “I think the whole team was excited to see it realized, and that it looked great from day one.”

To this day, Bavington takes pride in his sculpture serving as a focal point of The Smith Center campus, helping to welcome all who seek to enrich their lives through the arts.

“It’s been the most rewarding work I’ve made — part of a living space, enjoyed by many of the visitors to The Smith Center every day,” he says. “We couldn’t have aspired to, or achieved more.”

Due to public health and safety guidelines during the pandemic, The Smith Center has cancelled or postponed over 350 performances totaling more than $20 million in lost revenue.