A World Tour of Theaters: The Story of The Smith Center’s Design 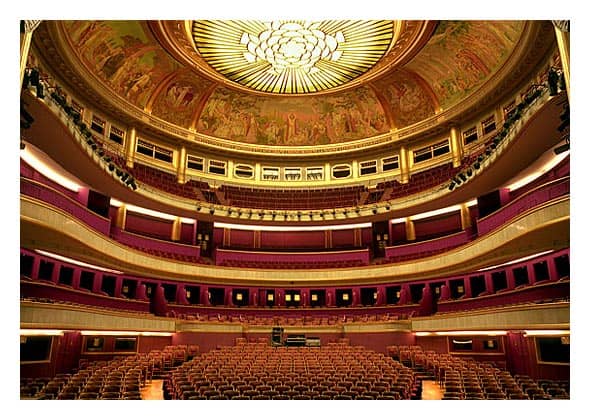 Before a single shovel broke ground for The Smith Center’s construction, the project team members needed to nail down just how the facility of their dreams should look.

They knew they wanted to build a stunning facility that would serve as an iconic Las Vegas landmark “that would stand the test of time,” says Myron Martin, key consultant on the project and now Smith Center CEO and president.

They just needed ideas for what that would look like.

To gather inspiration, they boarded a plane. A lot of planes.

In a whirlwind journey, several of the center’s visionaries and designers jetted across the globe to tour the world’s most historic and revered venues.

In total, they toured over 100 venues — including visiting 14 theaters across Europe in just five days.

“When we say we’re going to build a world-class performing arts center, we don’t take that lightly,” Martin says. “Studying the great halls of the world gives us the foundation on which to build.”

This theater-touring pilgrimage began with a red-eye flight to Paris.

There wasn’t much time for sightseeing.

Focused on the business at hand, the team pored over the city’s many historic venues, such as the Palais Garnier, L’Opera Bastille, the National Theater of the Opera Comique and the Theatre des Champs-Elysees.

“It was enlightening, invigorating, exciting,” Martin says. “We were able to point and say, ‘We want it like that.’”

After Paris, they visited internationally renowned theaters such as La Scala Opera House in Milan, the Hungarian State Opera House in Budapest and Teatro La Fenice in Venice.

They strived to pinpoint what gave each venue its magic, what best promoted acoustics, and the ideal infrastructure to house music, theater and dance performances under one roof — a high priority for The Smith Center.

“Theater spaces come in all sorts of shapes and sizes,” observes architect Schwarz. “There is no better way to understand them than standing in them and talking about them.”

Their exhaustive travels paid off.

The team determined numerous key elements of The Smith Center’s design from the world tour.

They drew inspiration from the opera boxes of La Scala for the center’s box tier. The stairs of the Theatre des Champs-Elysees sparked ideas for The Smith Center’s Grand Lobby staircase.

Comparing venues also helped the team settle on a horse-shoe shape for the center’s 2,050-seat Reynolds Hall, which would provide the most flexibility for a wide variety of performances.

“The trip was incredibly useful, and its success can be seen in the final resolution of (Reynolds Hall),” Schwarz says.

An Homage to Southern Nevada

The heart of The Smith Center’s design, however, draws from its own home of Southern Nevada.

When the project team members had their pick of 33 top-level architectural firms to design and build the facility, they had no trouble selecting David M. Schwarz Architects.

That’s because Schwarz offered an idea that ensured The Smith Center would represent the people and culture of its city.

The architect envisioned the center with a timeless, art deco design based off the architecture of the Hoover Dam, in honor of how the dam transformed Las Vegas as a city.

“That was it. It was what we dreamt of,” Martin says.

This clinched the overall grand aesthetic of The Smith Center, with art deco features such as sweeping, masculine lines, along with elegant, silver trimmings to celebrate the Silver State.

Combining all of these elements from at home and abroad resulted in a design that will mesmerize visitors for years to come.

“(The Smith Center gives) Las Vegas something that will be treasured from generation to generation, well into the next century and beyond,” Snyder says.

Due to public health and safety guidelines during the pandemic, The Smith Center has cancelled or postponed over 350 performances totaling more than $20 million in lost revenue.
As a nonprofit, The Smith Center needs community support now more than ever.