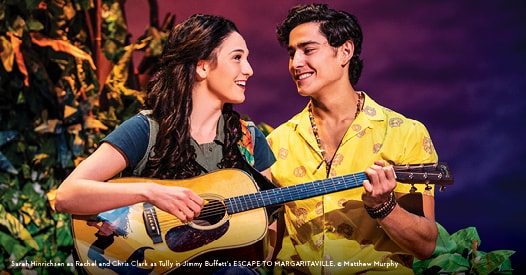 Ever flirt with the idea that you might be a Parrothead?

If so, hold this title with pride.

With similar passion to Deadheads, these devoted Jimmy Buffett fans faithfully attend his concerts with his melodies memorized… And with parrot hats and Hawaiian shirts happily on display.

There’s no better time to be a fan of Buffett, the king of catchy, laid-back earworms, now that he has earned the theater spotlight.

Broadway musical “Escape to Margaritaville” — coming to The Smith Center January 7 to 12, 2020 — features more than two dozen Buffett tunes. These include beloved hits such as “Come Monday,” “Margaritaville” and “It’s Five O’Clock Somewhere,” plus all-new originals Buffett penned for the show.

This lighthearted musical also offers a feel-good story, set fittingly in a tropical paradise, with exuberant choreography that will delight even those new to Buffett songs.

Unsure if you fall into the ranks of the diehard Parrotheads? Take the test below to find out.