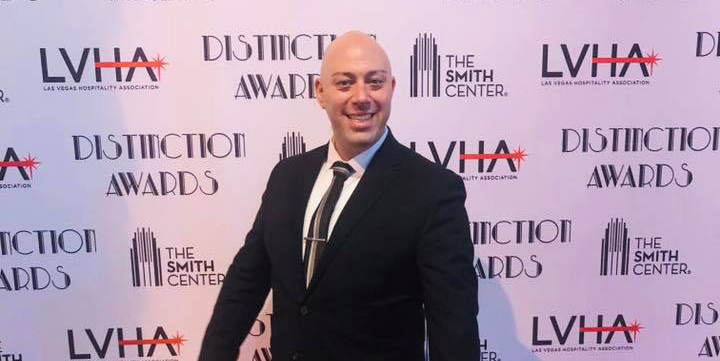 Harrison Harvey is no stranger to multitasking.

As associate director of Hospitality and Events at The Smith Center, Harvey organizes the multitude of community events hosted year-round on campus.

But even before this, Harvey dominated a demanding career overseeing acclaimed productions in prominent New York City theaters, large-scale theater festivals and attractions.

These roles held endless responsibilities to bring live entertainment to the masses.

A lifelong zealot for the performing arts, Harvey wouldn’t have it any other way.

“Even watching the same show twice, you never see the same performance twice,” Harvey explains of his love for theater. “The actors, production crew and the audience share that moment together, never to be experienced the same way ever again.”

From the Box Office to the Top

Harvey’s theater career started Off-Broadway, where he worked with patron services and as box office treasurer.

Not glamorous, perhaps, but Harvey loved it.

“I always liked being the first face people encountered as they entered the theater,” he remembers. “The experience of going to the theater starts the moment a guest retrieves their tickets from the box office.”

Hooked by this taste of the theater, he quickly climbed the ranks of the industry.

He learned to multitask as box office manager of popular Off-Broadway multi-theater complex, Theatre Row, where he worked on over 500 shows in five years.

“We had six venues, with shows in and out all the time,” he says. “I love the fast-paced lifestyle of the theater. The production comes in on Monday, and by that next Sunday, they’re gone.”

This only helped groom him for broader responsibilities. This included managing shows for the New York Musical Theater Festival, the largest musical theater festival in the county.

He went on to work as a general manager on many high-profile productions in New York City, where his role spanned budgeting, payroll, marketing, staffing, and most important, he says, “calculating weekly operating expenses so the show can sustain.”

The hard work was all worthwhile to see audiences uplifted by the productions he helped present.

“The audience always sang along in their seats,” he recalls of one of his favorite shows, “Sistas – The Musical,” highlighting female music icons. “People left the theater in the best mood.”

The toughest challenge he faced? Overseeing The Ride, an entertainment bus attraction with live performances on the bus and on the streets of New York City.

“If you want operations experience, try coordinating bus tours through midtown Manhattan on December 24th with 3 feet of snow,” he says.

Bringing Community Together at The Smith Center

These rigorous jobs prepared Harvey well for his current role at The Smith Center.

With The Smith Center serving as a hub for the community, the facility hosts hundreds of community events each year in its 15 different venues, lobbies and outdoor spaces.

Harvey organizes them all.

The Smith Center often hosts high-profile occasions, too, such as the State of the Department address for the Las Vegas Metropolitan Police Department.

Many events bring community members together, Harvey adds, such as cultural celebrations, church services and charity walks, as well as events for Clark County School District and the University of Nevada, Las Vegas.

“We like to call The Smith Center the living room of Las Vegas, because that really is the center’s purpose, to serve as a gathering place for people of all walks of life,” Harvey says. “You don’t see this more clearly than at the events we host for the community.”

Harvey remains involved with planning each event every step of the way.

This includes an initial tour of the campus, and cobbling endless details such as catering, staffing, decorations, entertainment and more.

“The most important step is to plan — plan well, and plan in advance,” Harvey observes. “We have an event this year in June that we have been planning since 2015.”

Harvey’s role allows him to witness meaningful moments in people’s lives, he adds.

In the more than 50 weddings he has coordinated, he always stands behind the bride before she starts down the aisle.

“There is nothing like those few moments before they walk down the aisle. I always take a picture of the bride, sometimes with her father, or another member of their family,” he says. “Through those pictures and those deep breaths, everything they have worked for has paid off.”

He has even celebrated a lifechanging event of his own at The Smith Center.

Harvey got married at The Smith Center, and couldn’t imagine a more fitting setting.

“All of my guests exclaimed that this was the most beautiful wedding venue they had ever been to,” Harvey says. “There is no place like The Smith Center.”