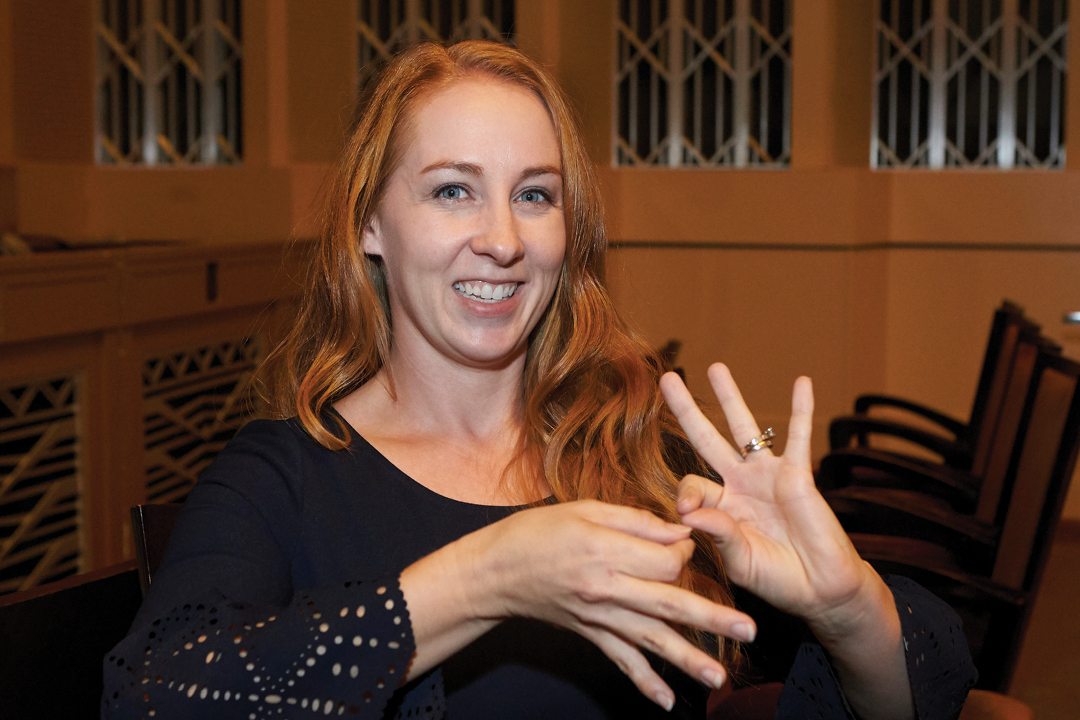 “I’ve had issues with my hearing for some time, which can make it very hard to hear live shows. With The Smith Center’s assistive listening devices, I really feel like I’m hearing everything on stage now. I get so much more enjoyment out of every production I see.”
- Hearing-impaired Smith Center Patron

The Smith Center for the Performing Arts strives to make its events and performances accessible to all patrons in the community.

To purchase accessible tickets, please contact us via email at [email protected].

For questions or more information, please contact us via email [email protected].

Accessible seating is reserved for use by patrons with disabilities.

All of our performance spaces have wheelchair and mobility-assisted seating locations.  Patrons have the option to remain in their own wheelchair, or transfer to a fixed theater seat with a swing-out armrest.  Patrons who do not wish to transfer from their wheelchair to a theater seat should request wheelchair-accessible locations when ordering tickets.  Seats with removable armrests are available in various locations if you wish to transfer from a mobility device or wheelchair into a fixed theater seat.  Please advise us if you are not able to ascend or descend stairs, suffer from acrophobia (fear of heights), or require any type of special seating accommodation for any reason.  The Smith Center staff is trained to assist you to find seating that best meets your individual needs.  To purchase accessible show tickets, please call us at 702-749-2000 (TTY USERS PLEASE CALL 800-326-6868 OR DIAL 711) or email at [email protected].

For the purposes of releasing Accessible Seating for general public sale, a performance or specific price category within a single performance will be considered SOLD OUT when there is no available inventory except scattered singles. Available inventory is defined as seats that are available for general public purchase and not held for The Smith Center or other contractual purposes.  Before releasing Accessible Seating for General Public sale, all seats being held, either in a hold code or a reserved unpaid order, will be analyzed.  If it is determined that there is a likelihood that a significant portion of these seats will be released for general sale, the corresponding Accessible seats will not be released for general sale until such time as the held seats have been released and/or sold.

ADA spaces are available in all of the City of Las Vegas garages and are clearly marked. Previous ADA spaces on the east side of the building (closest to the train tracks) have been relocated into the new City of Las Vegas garages. Though ADA spots cannot be specifically reserved in advance, you may still purchase your event parking, proceed to your specific garage and access the ADA spaces that are available on a first-come, first-serve basis. The Promenade Garage (355 Promenade Place) and the Symphony Park flat lot have the greatest number of ADA spaces.

The Smith Center is accessible by wheelchair in Reynolds Hall and throughout the Boman Pavilion.  Wheelchair assistance service is available curbside by request.  Curb cuts allow easy access to our sidewalk system, and parking area access ramps.  Main entrance doors have automated mechanical service.  All of our theater spaces offer elevators that service all levels of the facility.

Assistive Listening Devices (Infrared ALD and FM) are available at all performances and in all of our theater spaces.  These units are provided free of charge upon request at the Patron Services Desk in the Grand Lobby of Reynolds Hall. In Troesh Studio Theater or Myron’s at The Smith Center, please request a device from a front-of-house representative.  Simply exchange your valid driver license (or state-issued ID) for the unit upon arrival, and return the unit after the performance to reclaim your ID.

I-caption is available at select performances.  I-Caption is a state of the art wireless visual aid that provides verbatim closed captions in real time for live theatrical performances. This fully automated system displays dialogue, lyrics, and sound effects on a handheld display, assisting the hearing impaired patron to better understand the plot of a theatrical production.  The Smith Center offers this service on selected performances. Simply exchange your valid driver license (or State-issued ID) for the unit upon arrival, and return the unit after the performance to reclaim your ID. I-Caption is only available in Reynolds Hall.

The Smith Center presents sensory-friendly performances as they are available, which provide a supportive theater environment designed for individuals with sensory sensitivities.

Click here to learn more about our sensory-friendly programming.

Registered service dogs are permitted in our theaters and must remain on a leash or in a harness at all times.

Funding for the D-Scriptive and I-Caption systems that enhance our patron experience was provided by the generosity of the supporters of the NV Blind Children’s Foundation.